The Year Of The Next-Gen Cyberattack Over the past year, the industry saw several high-profile, global-scale cyberattacks. Singapore witnessed its greatest data breach yet, with the SingHealth attack compromising the personal data of 1.5 million patients. Billions of other personal records were stolen in 2018, unearthed in breaches that successfully targeted household names in government, technology, healthcare, travel and hospitality. Compounding the problem has been increased geopolitical tension between western democracies and countries like Russia, China and North Korea.

According to Carbon Black’s threat research, 2019 promises to be a year where endpoint visibility becomes more paramount than ever as attackers continue to evolve and global tensions increase. To better understand the current attack landscape as we head into 2019, the Carbon Black Threat Analysis Unit (TAU) researched the current state of cyberattacks across the Carbon Black customer base and in conjunction with our incident response (IR) partners to produce all of the content enclosed in this report.

The top five industries targeted by cyberattacks in 2018, according to Carbon Black’s global threat data were: Computers/Electronics, Healthcare, Business Services, Software/Internet and Manufacturing. 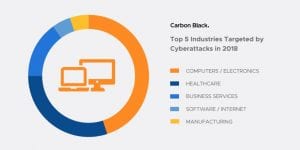 As 2018 came to a close, China and Russia were responsible for nearly half of all cyberattacks. Of 113 investigations our IR partners conducted in the third quarter, 47 stemmed from those two countries alone. 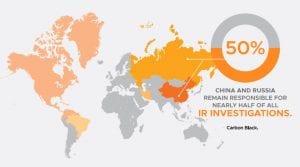 To quantify this figure and put in perspective how far cybercrime has evolved, we looked at the data from the Singapore Police Force’s Mid-Year Crime Statistics for January to June 2017, which reported over $40 million in victim losses from total internet crime in Singapore.