Richard Soley, Executive Director, Industrial Internet Consortium and Chairman and CEO of the Object Management Group (OMG) shared his insights on the adoption of the Internet of Things and the immediate challenges associated with the technology. By Mark Johnston

Q: Tell me more about your background and the work you do?

Dr Richard Mark Soley (RMS): My name is Richard Soley. I am the chairman and CEO of the Object Management Group. One of the largest standards organisations in the world. And also executive director of the Industrial Internet Consortium.

The OMG is a 30-year-old standards organisation. We were created originally to invent the field of middleware. In the mid-90s we moved into modelling standards. About 85 percent of the standards thrown to publishers are in vertical markets, such as healthcare, manufacturing, transportation and so forth. We also run consortia that are separate for their members and the one that is most important today is the Industrial Internet Consortium. That is nearly 300 companies that are building IoT applications.

We call them testbeds. They are actually applying IoT to industrial systems, manufacturing and production but also energy generation, distribution, and transmission, and smart cities, and precision agriculture and so forth. The idea developing standards when you do not yet know what standards you need is a waste of time. We are collecting information about what standards are necessary; requirements generation, basically. As we build these ecosystems of companies to do these IoT projects, we are also learning how to hire people, how to train people, how to retrain people, those sorts of things. 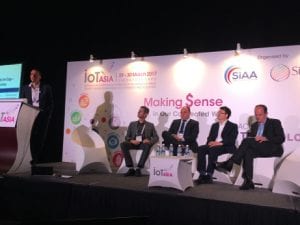 Q: How far along are we in standardising IoT?

RMS: There is a stack of technology which we call IoT. First of all, IoT means collecting information from a large number of sensors, doing real-time predictive analytics and delivering decision support to decision makers or directly actuating actuators in the real world. There are lots of different standards there. There are sensors, there are actuators and real-time analytics, and so forth.

We need standards in areas such as signal analysis. Most importantly in what OMG specialises in, which is semantics. If you have been listening to some of the sessions at IoT Asia 2017 you will keep hearing GE talk about their jet engines that collect an enormous amount of information on every flight. Rolls Royce engines do that too but they are in different formats. The semantics of that information has to be standardised. We are in its infancy in regards to this. However, rather than just go and standardise, it makes sense to actually build systems and learn. Some of those testbeds are going to fail.

I will tell you some of the testbeds to give you a feel for what we are doing. The first testbed was started just 2 years ago and is led by Bosch and Tech Mahindra. It now includes SAP and National Instruments. They are essentially reinventing the way you manage manufacturing floors by tracking everything on the floor. One of their biggest customers has a factory in which the workers spend half their time looking for the right tool. The system knows where the tools are. It makes more sense to take them back to some central repository. It also allows them to make the floor safer by keeping track of people getting too close to the robots and also knows which tool it picked up and what part it picked up and whether they are putting it into the right work in progress. Which work in progress is going to be completed soon and will be available to ship out. The efficiency of the floor and safety of the floor and so forth.

Just to give you a feel for the variety, our second testbed one is in County Cork. This testbed is a very simple idea. Connect the national resources of Ireland with the county resources of Cork. In Cork what we have done is connected national and county resources and the first test they are running on that testbed connects the national health resources with the county-run ambulance services. When the ambulance is on its way to you they have downloaded already your health records, uploaded it directly to the ambulance so the ambulance knows what it is they are dealing with before they get there.

In the ambulance, on the way back to the hospital they are updating the records, which then go directly to the national records but also go to the hospital so they know what they are dealing with before the patient arrives. I am quite sure they have already saved lives with this implementation. Q: When you mentioned Rolls Royce and GE, they basically use different standards, so would they get together or join an organisation and agree on a set of standards to use?

The approach that OMG always takes for standardisation is capturing an abstraction in a modelling language, such as UML, and so forth. We typically use those and standardise the translation from that abstraction into the different standards that exist under me.

That way you have created a standard, a meta-standard in a sense, that does not add to the mess. It allows you to transform them.

Let me tell you why. Here is an idea for a testbed that we are not currently running, but we could. If I could connect all the apparatus that is on patients in our very large country and of course I anonymise and aggregate that data. I could use it, not only to tell the wavefront of a public health menace, a disease that is going to overrun the country, but I could predict where that public health menace is going. I could then share that data with pharmaceutical companies so that they could create the correct antibiotic and then share it with the distribution companies so that it is delivered just ahead of the wavefront of the public health menace.

RMS: They are very similar. We need a platform otherwise you are going to have to build your own platform. Different platform vendors are going to win in different markets. You are already seeing that between GE and PTC, for example. The announcement two weeks ago, GE and Bosch are now connecting their platforms. They are working together, even though you could say that they are competitors in the IoT and the Cloud space. In fact, they are working together and I think you are going to see more of that.

Q: Standardisation will have an impact on security. Can you discuss the implications there? RMS: First of all, let me say something horrible about security. If we do not solve the problem everybody is going to ship their product anyway. That is just what we learn from history. That is not going to change anytime soon.

RMS: Those are two different problems. I think the biggest problem right now is the reliance on internet technologies or the underlying infrastructure is not particularly secure. I implemented one of the first TCP/IP stacks in 1979. Back then security was not an issue because it was shared amongst friends, basically.

Everybody trusted everybody. If we are going to use that infrastructure for industrial automation, and we are, then we are going to have to build something on top of it to secure it.

In September 2016 we published a security framework on how to secure an industrial solution that uses IoT. The main thing is not to ignore the problem. There have been some voices that actually have said it is not a problem because industrial systems will never be connected to the open internet. That is simply not true. Eventually, every internet system gets connected to the internet, either on purpose or by accident.

CHECK OUT THESE OTHER ARTICLES