As robotic technology continues to advance, robots are becoming closer physically to humans, working side-by-side. The collaborative robot (co-bot) is the result of this evolution, allowing humans and robots to work side-by-side safely. By Shermine Gotfredsen, GM, APAC, Universal Robots.

The first industrial robot in the world was invented by George Charles Devol in 1954, and named ‘the Unimate’. In 1961, General Motors was the first to install Unimate in its automobile factory in New Jersey. And the rest is history. Companies and manufacturers from around the world gradually adopted the technology and created different types of industrial robots to suit their industries’ specific needs.

Industrial robots are machines that have been designed to operate on behalf of humans in a dangerous or repetitive setting, reducing error and providing more strength or accuracy to increase productivity. Twenty years ago, they were mostly large and heavy in built, often caged for safety precautions, and very costly to program and operate. Now, new technology advancements in the industry have enabled the creation of robots in a range of shapes, sizes and configurations. They can perform a wide variety of tasks useful for different industries such as manufacturing, F&B, healthcare, logistics and more.

In recent years, we have seen the advent of collaborative robots, or ‘co-bots’, which are essentially robots designed to operate collaboratively with humans. This type of industrial robot is able to operate safely alongside their human counterparts, serving as a tool to function efficiently in dangerous environments or completing repetitive tasks.

Co-bots are also lightweight and easy to operate, and can be used for a range of applications, enabling efficient processes, and most importantly, help raise safety standards. These state-of-the-art robots have revolutionised the way manufacturers operate, enabling them to take advantage of the varying strengths of both humans and robots, allowing them to work collaboratively in the same workspace.

Positive Outlook For The Robotics Industry 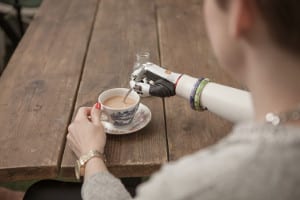 The robot revolution is here, and rapidly growing. According to the International Federation of Robotics (IFR), over 200,000 industrial robots were installed worldwide in 2014, 29 percent more than the previous year. Separately, International Data Corporation (IDC) found that Asia Pacific accounted for over 65 percent of the world’s robotics spending last year, and the region is expected to remain the world’s strongest robotics market in the next few years thanks to its leading position as the world’s largest manufacturing industry.

In ASEAN, Singapore is seen as a market that is rapidly growing, especially with such strong support from the government in transforming businesses through robotics. According to the Singapore Budget 2016, over S$450 million (US$334.41 million) will be invested into the National Robotics Programme over the next three years to support the deployment and development of robotics in sectors such as healthcare, construction, manufacturing and logistics.

The Singapore government is currently working with solution providers to offer packaged solutions to SMEs at reasonable costs, enabling them to minimise spending and at the same time create higher value-added jobs. For instance, government agencies Singapore Economic Development Board (EDB) and SPRING Singapore have partnered with Universal Robots to develop cost-effective robotic applications and solutions for Singapore SMEs. They are also organising a series of seminars and workshops for decision makers and engineers at no cost, for them to learn more about deploying robots in their facilities, ways to operate them and the benefits in the long term.

In lieu of inflation and the need to tighten budgets, business owners should ride on such opportunities to better understand the benefits of automation and how to do so into their existing processes. Otherwise, they would face challenges to stay competitive and relevant in their respective markets.

Moving Towards A Successful Future

The trend in deploying industrial robots into production lines is only going to increase over the next few years. IFR predicts that about 1.3 million new industrial robots will be installed in factories around the world by 2018. Due to their affordability, flexibility and easy-to-operate features, co-bots are increasingly being integrated into production lines to enhance business growth. This is especially important to meet consumer demands that are rapidly growing, qualitatively and quantitatively.

In the near future, human-robot collaboration will play an integral role in facilitating sustainable growth and success. This is indeed an exciting time for businesses, as they would need to look at ways to expand their horizons beyond what they traditionally perceive as being effective to survive in this fast-paced businesses environment.

IO-Link Instead Of Fieldbus
Manufacturing And 2D Imaging

Chemical Industry Trends
Achieving Cobot Safety In Future Automation
Are Industrial Robots The Missing Piece To Your Industry 4.0 Puzzle?
Leave That Job for the Robots! How Industrial Robots Can Take Over Your Tedious Tasks and Boost Prod...