How B&R Is Transforming Factory Automation Since B&R was acquired by ABB, the automation firm has continued to transform the factory automation space with robotic integration. 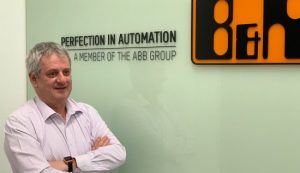 Ever since B&R Automation was acquired by ABB in 2017, the firm has found ways to integrate each organisation’s respective strengths into a combined solution.

Now a unit of ABB’s robotics and discrete automation business, the firm revealed a total solution that leverages ABB’s robotics technology for factory automation, merging robotics with machine control into one unified architecture.

This will enable B&R to supply machine builders with machine automation and robotics from a single source, acting as a single supplier of robots, control, I/O and drive components.

“Together with ABB robotics we form the business unit, robotic and machine automation.

“There is now a lot of interaction and cooperation possible,” said Otto Hochreiter, regional manager, Southeast Asia and Australia, B&R Automation. “One of them is to integrate the robots into B&R’s world.”

Otto explained that the automation world also has their programming system, but also takes care of real-time machine capability and on axis synchronisation. “In this case, we bring both worlds together,” he added. “So we integrate the robot into the machine automation.”

Furthermore, while integration has occured on many levels, there is still, said Hochreiter, a demand for standalone robots with their own development environment and controller.

On the other hand, “B&R was always having a robot controller for open robotics and at that point in time we named it open robotics, meaning we can control every robot as long as we can access the feedback system of the motors,” said Hochreiter.

“Then we can control as a part of this automation. And in this case, ABB robotics now open to serve and to offer the robot without ABB control, only with the interface to the outer world and B&R for our controller is operating and controlling a full robot.”

One of the main benefits of this merger is the high degree of synchronisation achieved between the robots, controllers, and other components.

Furthermore, since the robot will no longer require a dedicated controller, all interfaces between the machine and the robot are eliminated, while the fact that all axes and sensors will now communicate on a common network. This significantly increases precision to the microsecond range, according to the company.

Integrating robotics and automation also means only one controller and one engineering system will be needed for development, diagnostics and maintenance, so there will no longer be a need for an extra control cabinet just for the robot, which saves floor space.

READ: Putting Automation In The Hands Of People With Cobots

The movements of the robot and all of the machine’s motion control axes can be coordinated with microsecond precision, boosting the productivity of the machine and the output of the process.

The robots are programmed in B&R’s universal engineering environment just like all other automation components, while in the digital twin the user can simulate and optimise the machine’s entire motion sequence, including the robotics, before the machine is built.

This makes engineering and development both faster and cheaper, which in turn lowers the threshold for machine builders looking to implement robotics in their production machinery and increases their return on investment.

“When the robot is tightly integrated into the PLC, we have a microsecond synchronisation between the PLC but also other moving parts, so you can really synchronise the robot to external movements,” said Hochreiter.

“Additionally, it should be easy to use. Easy to use means you have one tool, one stop. And everything is in one operating and programming system,” he added.

This helps to reduce development times significantly. Furthermore, with the ready-made software components of B&R’s mapp technology, developers can quickly set up and configure the machine application, including robotics, without any knowledge of special robotics languages.

According to Hochreiter, the response has been positive to their complete solution, with more than 20 customers across Southeast Asia expressing interest in leveraging this solution for their own manufacturing and assembly needs.

The integration eliminates the need for a dedicated robotics controller, a seperate control cabinet and a specialist for a specific robotics language. The user has access to all the familiar machine programming languages like Ladder, Diagram, Structured Text and C/C++.

READ: How AI And Robotics Are Transforming Factories Of The Future

The firm’s mapp Robotics includes standard functions for control and commissioning as well as advanced functions such as feed-forward control, compressor and workspace monitoring.

This allows the user to implement complex and highly dynamic applications without having to write countless lines of code. Development times are reduced dramatically, according to the firm.

This becomes possible when you no longer need to use seperate hardware, separate communication networks and separate applications.

The fact that all axes and sensors communicate on a common network increases precision to the previously unimaginable microsecond range.

A workpiece on a workpiece table, for example, used to be positioned and come to a complete stop before being machined by a robot.

Now, the machining can take place while both table and robot are in motion. The machine application can automatically calculate optimised motion profiles and significantly reduce the overall processing time. Productivity goes up.

Some years ago, machine builders began integrating robots directly into the machine process to make their machines more flexible. Yet this flexibility came at a high cost, and the resulting synchronisation left much to be desired.

It has its own controller and its own control cabinet. Engineering, diagnostics and maintenance are all performed using dedicated systems. Communication with the machine controller goes through an interface – which in many cases is even hardwired.

For those in search of a more expedient way to integrate robotics into a machine, the answer is clear: these two systems must meld into one.

Throughout engineering and operation, working with the robots is just the same as with any other B&R automation component.

Machine builders will be able to choose from a wide range of ABB robots, including articulated arm, SCARA, delta and palletiser robots in various sizes and with various payloads. This is particularly important for machine applications where a high degree of synchronization with other components is required, for example with picking solutions.

With ABB robots integrated into the machine automation system, customers will benefit from an unprecedented level of synchronisation between robotics and machine control. Since the robot will no longer require a dedicated controller, all interfaces between the machine and the robot are eliminated, while the fact that all axes and sensors will now communicate on a common network increases precision to the previously unimaginable microsecond range.

Integrating robotics and automation also means only one controller and one engineering system will be needed for development, diagnostics and maintenance, so there will no longer be a need for an extra control cabinet just for the robot, which will save floor space

Growth Of The Digital Twins Market Is Driven By Industrial Digitalisation

Rise Of Smart Data In Manufacturing

Grundfos And Augury Partner To Advance Digital Future Of Water

Why Are PLC, SCADA And HMI Perfect For Industrial Automation?
DKSH and HP Discuss Industrial Transformation Through 3D Printing

The Road To Electric Vehicles With Lower Sticker Prices Than Gas Cars – Battery Costs Explained
ABB Information Systems Leverages Google Cloud To Expand Its Cloud Footprint
ASEAN Pivot: The Challenge For Electronics Manufacturers
The Current Industrial Automation Paradigm is Flawed and Here’s What to Do About It!