The MiR250 sets new standards for internal logistics with a robot that is faster, safer and more agile than any other solution in the same category on the market. It has a small footprint, allowing it to drive through doors as narrow as 80cm while still being able to move as much as 250kg with a speed of 2 meters/second. 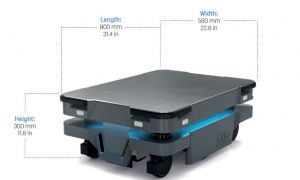 The MiR250 is built for harsh industrial environments

Internal logistics is a bottleneck for many companies because of the frequency and uniformity of the tasks, combined with the lack of qualified labor. Mobile robots, which are autonomous and navigate around people and other obstacles, strengthen internal transport in many different industries around the world, and MiR’s new MiR250 is a robot that can streamline logistics even more.

The MiR250 has a robust design with several of its standard components made stronger. This gives the AMR a longer lifetime and allows it to operate effectively in industrial environments 24/7 with an option for fast battery swap.

Autonomous mobile robots are designed to function in collaboration with people without external safety measures. The MiR250 is designed based on present safety standards and is the safest robot of its kind on the market.

Streamline your logistics even better with MiR Shelf Carrier

Together with the MiR250, MiR have developed a standard top module which fits to the MiR250: MiR Shelf Carrier. The Shelf Carrier is an anchoring device, enabling the robot to collect and deliver, shelves, carts and other applications. It makes it possible to lock carts and move them and is available directly from MiR.

Mobile Industrial Robots is a leading manufacturer of autonomous, collaborative mobile robots, dedicated to developing user-friendly, flexible and safe robots to help companies increase the efficiency of their operations. MiR is represented worldwide with branch offices and through an extensive distributor network. Founded and run by experienced Danish robotics industry professionals, MiR is headquartered in Odense, Denmark, and in 2018, was acquired by Teradyne, the leading supplier of automated test equipment.  For more information, visit mir-robots.com.

Achieving Cobot Safety In Future Automation
Incremental Steps To Creating Value With Industrial Data Analytics
Are Industrial Robots The Missing Piece To Your Industry 4.0 Puzzle?
Leave That Job for the Robots! How Industrial Robots Can Take Over Your Tedious Tasks and Boost Prod...