Collaborative And Sensitive Robots Set To Shape The Future Of Medicine Sensitive and collaborative robots look set to play a defining role in the future of robotics in medicine. By Sebastian Schuster, Global PR & Content Manager, Kuka. 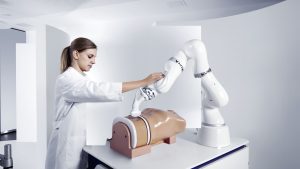 While robots are gaining a greater presence in the world of medicine, they are not newcomers to this field. They have been providing assistance for patient treatment in healthcare facilities from New York to Berlin and Tokyo for over 30 years.

The most well-known system from the ‘pioneering age’ is probably the Da Vinci surgical robot. Yet, despite all this ‘tradition,’ the age of medical robotics has only just begun. Sensitive and collaborative robots, in particular, will play a defining role in the future of robotics in medicine.

Are you familiar with Star Wars, Episode V? If so, you will certainly remember how the film ends. In the final lightsaber duel against Darth Vader, Luke Skywalker loses his right hand. He is able to flee and has a perfectly functioning prosthesis transplanted by an autonomously operating robot system.

“We are not quite that far yet in the fields of medicine and robotics, but our progress is also not to be underestimated,” said Axel Weber, VP Medical Robotics at Kuka in Augsburg, Germany.

Products manufactured by automation specialist Kuka include robotic components for integration into medical products. This is not a recent development.

“The first Kuka robot to be used in medical technology was put into operation in 1999. With it, we supported a radiotherapy system. Back then, the robot held a linear accelerator for the pinpoint irradiation of tumors. These applications are still highly relevant today and are in widespread use,” reminisces Axel Weber.

There are good reasons that robots are used in medical settings, with distinctions being drawn between the three larger fields of application. Robots can be used, for example, to carry large loads, such as linear accelerators or X-ray devices.

Other potential applications include processes that require great precision, such as the exact positioning of an instrument. They also involve sequences that last a long time and require consistently high precision, such as surgical operations.

Another scenario would be repetitive processes in which a robot performs the same task over a long period. One such example is the early rehabilitation of bedridden patients for whom a predefined therapy is to be achieved.

The advantages are obvious. Patients benefit from increased safety and precision of the treatment. Clinics improve quality by means of easily reproducible results and can also boost their productivity.

“However, collaborative, sensitive robots are becoming increasingly important in applications which the smaller, sensitive robots work hand in hand with physicians and therapists, assisting them with the treatment,” affirms Axel Weber referring to potential medical applications being opened to robots due to technological progress.

“This type of sensitive, collaborative robotics will enable many further advantages in medical environments in the future, with all sides complementing one another and exploiting their respective strengths. The physician or therapist plans, controls and monitors while the robot performs the tiring and strenuous tasks, as well as those that require particular precision and, above all, sensitivity.”

A Wide Range Of Applications Is Becoming Possible These sensitive robots are already providing a glimpse into the future as components of medical products in a variety of applications. A sensitive robot system is being used in rehabilitation to move the legs of bedridden patients for therapy purposes.

In the field of cosmetic surgery, the ARTAS iX, a product of Restoration Robotics, uses a sensitive robot with a special instrument to remove hair from a human head and implant it in bald areas. Another example is MURAB, an EC-funded research project that aims to increase the precision and effectiveness of biopsies in breast cancer diagnosis using a robot-controlled ultrasound scanner to enable more targeted use of expensive MRI scans.

The objective of this medical product is to radically improve the results of bone surgery by replacing mechanical cutting instruments with non-contact ‘cold’ laser photoablation and robotics.

What do all of these application examples have in common? “The sensitive robot integrated into these applications is the LBR Med from Kuka, the German abbreviation for ‘Lightweight robot Medicine,’” explained Axel Weber.

The first units were introduced to the market in September of 2017. The base technology for the robot originated in the German Aerospace Centre (DLR), where a lightweight, sensitive robot arm was developed for use in space. Kuka adopted the robot as part of a technology transfer and further developed it for industrial operation as the LBR iiwa.

What are the advantages of the LBR Med? “It is the only robotic component that has been certified in accordance with the CB Scheme, so our customers can easily integrate it into their medical products,” explained Axel.

Since the applications that the robots are integrated into are finished medical products, the systems must always be tested and approved accordingly. There are international standards for this, such as IEC 60601-1 for medical electrical equipment and IEC 62304 for medical device software.

One of the most attractive features of our LBR Med robot is that we developed it on the basis of these standards. As previously stated, this makes it the only robotic component that comes with such a certification from an accredited test centre for integration into a medical product.”

Furthermore, the LBR Med features integrated sensitivity. This is a major advantage for medical product manufacturers. Robots that work on or with humans always require a corresponding safety system.

They must either be protected by a special cover or have integrated sensors that detect undesired contact, or they must be equipped with an external system, such as cameras that monitor the robot.

“The LBR Med has force-torque sensors installed in all seven axes, providing it with this sensitivity and safety. In the case of even the slightest unplanned contact, it can come to a complete standstill and interrupt its tasks. This sensitivity can also be used for simple, intuitive operation of the system by hand.”

Kuka supports the process with robot training courses and a support team. “Worldwide, our customers have incorporated about 1,800 robot systems into their solutions. This makes us one of the most important players in the medical robotics market,” said the VP of Robotics.

Axel Weber predicts a big future for collaborative and sensitive robots in medicine. “They will be used in more and more fields going into the future. The demand in surgical and therapeutic applications will move increasingly towards small, compact, precise and sensitive robots, making the sensitive LBR Med robot a natural fit for them.”

Due to a large demographic change, there is also great potential in the areas of rehabilitation and elderly care. Axel Weber sees artificial intelligence as the most important development for enabling improved planning of patient care in the future.

He also envisions how it will affect robotics. Once this technology is mature, the performance of robot systems will greatly increase.

These advances are great, but the use of a robot system remains entirely dependent on its acceptance by physicians and patients. As far as the former are concerned, Weber sees general acceptance, provided the physician retains overall control.

“It is the doctor who, ultimately, decides what the robot does and who has control over the entire medical application. Young doctors, in particular, demonstrate great willingness to work with such systems,” he explained.

With regard to patients, however, more educational work is required. “Acceptance here is heavily dependent on the specific application,” said Weber. “It is easier to let a robot guide the motion of an arm or leg during rehabilitation than to submit to an operation conducted by the robot.”

The challenge today, therefore, requires a delicate transition and combination of tradition and modernity to ease the minds of those new to these exciting applications.

The Rise Of The Cobots—Friends, Not Foes, In Today’s Manufacturing Landscape

Leave That Job for the Robots! How Industrial Robots Can Take Over Your Tedious Tasks and Boost Prod...
igus Introduces New Modular Gearbox Kit For Innovative Cobot Ideas
How Procurement Accelerates Digitisation In Food And Beverage New-Generation Industries
Ransomware And The Industrial Internet Of Things