As factories are becoming increasingly automated, robotic solutions are finding usage across the full spectrum of applications. Robots are increasingly being designed to collaborate effectively with their human counterparts that is seen as vital for their continued growth across sectors. By Shermine Gotfredsen, GM of Universal Robots APAC. 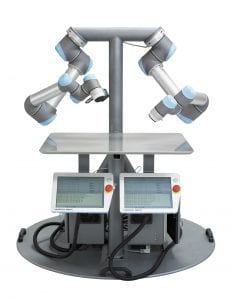 By any measure, global manufacturing has been in a bad way with most developed countries suffering severe downturns due to recession and rapidly falling demand.

Added to that is the reduction in employment in the manufacturing sector. This has been a worldwide trend as consumer demand and consumer confidence in the economic structure has declined. In Asia increased labour costs have also contributed to a downturn in employment numbers as manufacturers struggle to achieve a profitable return. Commodity price increases and an oversupply of manufacturing capacity in markets such as China have also had a major impact.

But as they say, with every dark cloud there is a silver lining and for Asia the opportunities to build a strong manufacturing capability are there for the taking.

Statistics show that despite the global downturn, manufacturing continues to grow, albeit slowly, and it remains one of the major sources of GDP for many nations. This is particularly the case in the Asia Pacific region.

Recent figures released by the Asian Development Bank (ADB) show a very optimistic trend from South East Asian Economies with GDP growth forecast to continue well into 2017. An increase in foreign capital investment in Thailand, Vietnam and the Philippines is continuing to have major benefits for the manufacturing sector in those countries.

A level of uncertainty around Thailand appears to be lifting as higher levels of investment, local and international has given domestic demand a much needed boost.

But there are a number of major infrastructure projects commencing or about to start in Thailand which will require the support of the local manufacturing sector.

Figures show that about 16 percent of global GDP is derived from manufacturing and as the developed economies of Europe and the Americas recover from their recessionary gloom, they will be looking to return to much higher levels of production.

For Asia and Thailand in particular this presents a major opportunity to drive innovation in technology and meet the increasing output demands of end users.

The 2016 Global Manufacturing Competitive Index produced by Deloitte Touche Tohmatsu Limited identified Thailand as one of five Asian nations that are part of a regional industrial growth group. The report indicated at Thailand, along with Malaysia, India, Indonesia and Vietnam, could form a manufacturing powerhouse block and a global power.

The lower costs, access to workers skilled and otherwise, will say the report, see this block of nations rise in world ranking by 2020.

One key element is the need, particularly for Thailand, to look at the manufacturing process, structure and technology. The report states that the block countries will need to have an ‘agile manufacturing capability’and the need to be flexible and innovative in the application of modern manufacturing techniques. Being competitive from a cost and quality perspective will drive much of the future growth.

It also means that Asia need to be looking closely at its manufacturing processes and retooling to ensure the region builds a highly efficient manufacturing sector focused on automation and the implementation of robotics and collaborative robots (cobots). The retooling and the use of robotics is a vital component in the future continued success of the Thai manufacturing capability. Universal Robots has been working with a number of Thai manufacturers to help them obtain the competitive edge required to win major tenders and to attract global customers.

Universal Robots believes that developing unique applications which offer faster moving manufacturers the opportunity to automate many repetitive and high precision processes will free up the labour force for other tasks such as research and development and marketing. The cost benefit of these changes is far reaching and will contribute to the elevation of Thailand as a manufacturing growth centre.

Looking closely at the prevailing trends, the work required for the success of an efficient automated manufacturing sector must include the implementation of a number of key elements. These include:

2. Predictive Analysis —This means the use of all collected internal intelligence to build a predictive analysis of the market. The key to success will be the ability to predict movements in the market, changes in the cost base and the ability for the manufacturer to move quickly to adapt to market forces.

3. Quality assurance —This refers to the maintenance and priority status of quality in manufacturing, the reduction of waste and the provision of environmental awareness and adherence to environmental principles. For instance, sales to global markets will most often rely on proof of environmental management controls.

4. Setting A Real-Time View —This means setting in place a process for visualisation which will allow the management to have a holistic and dynamic view of all operations in real time. This would include the ability to oversee people, assets, inventories, system, and suppliers throughout the process. There are a number of technology tools which help manufacturers do this.

5. Investment In Robotics — The most innovative companies in Asia are already investigating the use and application of robotics, particularly cobots; where there is a synergy between machines and the workers. This helps to provide the vital flexibility component allowing the manufacturers to apply the cobots to the tasks where they are most effective and efficient.

We can see from OECD data that by 2025 there will be an emergence of a new global consuming class and that the Asia Pacific region will account for the most dynamic group of people in this category.

The ‘new rich’as they are being called, will demand a much more efficient and quality oriented manufacturing sector. Diversity of product and goods which reflect the ‘fashion’of the market will result in higher levels of flexibility.

The OECD has reported that hiring in manufacturing is likely to increase substantially over the coming decade, however, it is this cost which is becoming one of the limiting elements for the development of a competitive sector in Asia.

It is here where the automation processes and more specifically the implementation of cobots will have its greatest impact. The ability to apply robotics to the manufacturing cycle and to free up human labour to undertake more specialised tasks such as research and development, analytical management of the manufacturing cycle and supply chain management, will result in increased output, greater quality and lower costs.

Gaining a cost-competitive edge has been a growing factor in forcing Asian manufacturers to move offshore. The constant search for lower labour costs is not necessarily tied to productivity benefits for the end user.

Inarguably, automation is well within the grasp of most Asia Pacific manufacturers. The rapid and continued advances in robotic technology provides lower cost, higher throughput equipment resulting in a much faster return on the investment to manufacturers. This means that manufacturers are able to substantially increase output while at the same time increasing quality and productivity generally.

The emerging markets that abound in Asia, which includes Thailand, have the opportunity to follow this lead. Smaller manufacturing operations supplying larger organisations with components can look to these examples to capitalise on the ever growing China manufacturing colossus. The China market is under pressure to keep its costs down as the labour force demands higher wages and improved working conditions. In many cases, the Chinese market is tooled up for large scale manufacturing but is not able to meet smaller scale flexible output.

Investment in robotics in China has increased rapidly to cater for the changing market pressures. In 2015 Chinese based organisations made up 13.2 percent of robot sales worldwide and this year the figure is expected to rise to more than 24 percent.

This is also a worldwide phenomenon with a report by the International Federation of Robotics (IFR) showing a total of 168,000 robots sold worldwide in 2013. That was a massive five percent increase from 2012.

The trend towards cobots on production lines has meant that smaller organisations have the opportunity to tender for supply contracts which would have previously been out of reach. Increased levels of productivity with product quality and the ability to meet stringent international benchmarks in output is the end result of the new manufacturing dynamic.

What appears to be happening in markets such as Thailand, Malaysia and Vietnam is the application of smaller scale robotics solutions allowing the manufacturer to adjust the production levels and thus allowing them to save on labour costs and rely less on unskilled workers.

The trend is now for technology which can work alongside human labour, or Cobots. Human interaction with the robot workforce involves some programming and the placement of the robots allows flexibility and adaption which will add productivity benefits to the manufacturing process.

Being able to move a robot from one task to another also adds a dynamic which previously was unheard off in applications for industrial robots. Smaller scale factories now have the option to move a robot to a production line process where it is most needed and then move it again to another task further down the line.

The massive gains in speed of delivery can provide the business owner with the difference between winning and losing a tender.

This model lends itself perfectly to many Asian manufacturing operations. Many of these manufacturers are smaller scale and not bound by legacy technology which may not allow for the flexibility of cobots.

The development of these more adaptable organisations does require government support. In many countries across Asia the process of fostering innovation in the production process is well underway. In Singapore, Thailand and Malaysia, government support through joint venture innovation funding is finding new and better ways of applying new technologies including robotics, to the manufacturing process.

Governments and business are concentrating on education and the development of specialised and innovative skilled workers. Many emerging companies are creating R&D facilities which are incorporating the data analysis, supply chain maintenance and technology upgrades to keep ahead of the competition.

The general increase in levels of education in computer technology, maths, engineering and sciences has provided Asian companies with a strong base to build on.

That process of education is creating innovation in diverse areas, for example work is underway to provide solutions for the reduction of energy used in the manufacturing process. This of course is a major and growing cost. Energy consumption together with rising real-estate costs have pushed business owners to innovate and think outside the box when it comes to reducing overheads. New method of reducing power usage by robots is one of the first areas being addressed.

The International Federation of Robotics (IFR) expects that the sale of robots worldwide will increase by about six percent on average year on year from 2014 to 2016. It has also predicted that the annual supply of industrial robots will reach more than 190,000 units in 2016. To think that global figures were around the 80,000 mark just 10 years ago, the recent boom can be attributed to the rise in production capabilities as well as the modernisation of factories or warehouses.